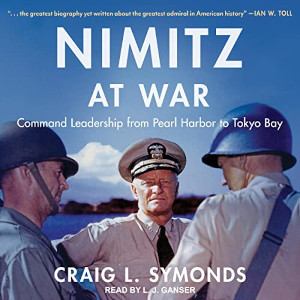 President Franklin Delano Roosevelt (FDR) was a Navy man. He loved the big boats, knew the value of a strong military presence at sea, and had a knack for the Navy's history. FDR, who had a bit of friction with senior Naval leadership, wanted to shake things up. He sought a rather junior Chester Nimitz to handle World War II in the Pacific "until the war was won," appointing him to a position under Ernest King. Amid flambouyant senior leaders, Nimitz held his own, with a mild mannered personality and uncanny ability to evaluate situations and judge correctly.

Craig Symonds takes us through the history of Nimitz's leadership in the war, intertwining aspects of Nimitz's personality and how he deftly negotiated through the dynamic pressures exerted between FDR, Douglas MacArthur, and Ernest King. He was as smart as anyone, smarter than many, and a team player. In a way, Nimitz was a bit like Abe Lincoln, as he could make a point or defuse a tense situation through storytelling. More than once, he cloaked his position in tales of a "shaggy dog" or "overworked doctor."

Symonds not only took a truly deep dive into his research for "Nimitz at War," he has a knack for assembling the facts into a very coherent and readable account of the life and war experience of exactly the naval leader America needed at that time.