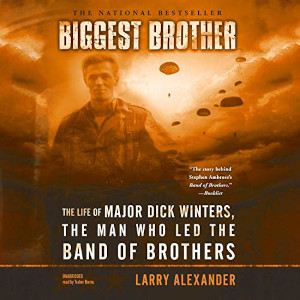 When it comes to models of leadership - who represents the best among leaders in great endeavors - Dick Winters has a reputation of being among the best. Larry Alexander has done his homework for this book and unwraps some of the riddle of why Major Winters was such a great platoon and company commander.

In short, Dick Winters did all of the things a good leader should. He lived by a simple and solid set of personal principles, learned how to recognize the talent in his team, set the right people into the right jobs, and led from the front. This book tell of Winters' life before World War II, how he came to be in the 101st Airborne Division, the war, and his life after the war. Adjusting to peace, and being home again, wasn't the easiest thing for Winters, but he managed better than many of his colleagues. There are some interesting anecdotes of Winters being a bit jumpy at certain sounds, for a while, be gradually became okay. Believe it or not, Winters came close to going abroad to fight in the Korean war, but ultimately remained stateside.

One of my favorite aspects of the book is following Dick Winters' friendships with Lewis Nixon, Bill Guarnere, and others. They were not always super close, but had a respect which lasted across the decades.