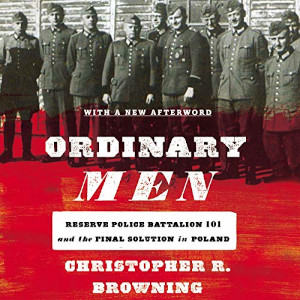 Most of us human beings like to believe that we are just regular folks, not so different from the next person. Perhaps we have some talents or maybe plain luck which puts us in a privileged position or not. We generally do not think of ouselves as possibly doing something which future generations would be shocked to learn of and frown upon. Christopher R. Browning studied the history of several people involved in the immense slaughter of Jewish people in Poland during World War II and discovered that a great many of the perpetrators who detained and deported them from Germany were not fanatical killers. Most were people of average education and temperment who were obedient on their jobs and not prone to bucking the system they were in.

Reserve Police Battalion 101 of the German Order Police was composed of middle aged working men who were actually pretty plain, by most standards. When ordered to do their part in rounding up and deporting the Jews, they did it. Over time, however, some of the men changed. Most simply did their jobs as instructed. Some evaded the dirty and violent killing which happened, while some others were drawn to the violence and sought opportunities for cruelty. Again, they all started as a fairly bland group of unremarkable but necessary people in a stable government job.

The chilling lesson that Browning repeatedly makes is that we are all those ordinary men. They changed with the circumstances and made choices of which level they gravitated to in support of a genocide. They, like us, don't dream as kids of growing up to carry out slaughter, but they bent when they felt the torque. A small number made the moral choice, in a passive manner, to not help. Browning makes the case that massive national movements bring quite a lot of peer pressure, and people tend to follow the crowd more than making a stand for what they believe is right. The underlying lesson is,"be aware - it could happen here more easily than you believe."